The H1 2015 IAB PwC Online Adspend Study sees growth of 25% in the Irish digital advertising market with a total digital spend of €162m.

Display advertising had the highest growth rate at 31% representing €59m in the first half of the year. Display now represents 36% of total digital spend.

Paid-for-Search advertising has grown by 26% year on year and remains the dominant digital format with a 55% share of total online adspend at €89m.

Classified advertising online holds a 9% share of total online adspend at €14m in the first half of 2015.

Also within Display, the H1 2015 adspend study calls out Native advertising for the first time at €16m in the period, representing 27% of total digital display.   Native formats include in-feed advertiser controlled ads such as those appearing on Facebook and Twitter, publisher controlled in-feed advertising which is a feature of content rich sites and Discovery/ Recommendation units.

Native is now a format that is anticipated to be primed for further growth across markets. 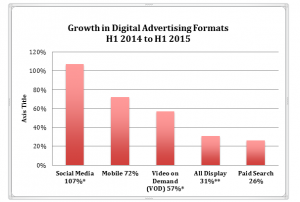 Finance and Retail share poll position as the top spending categories in Display spend across digital platforms holding a share of 15% respectively of display spend.  Auto, Telco and FMCG are in joint second position each holding a 10% share.

Reflecting the global growth trend of growth in Mobile adspend, the Irish market experienced 72% growth in mobile advertising to €65m in the first half of the year.

75% of Irish people use a smartphone*

Media agency Carat predicts a 16% growth rate for digital in 2015 with Mindshare forecasting a growth of 14% for digital adspend.

Commenting on the study results Suzanne McElligott, CEO, IAB Ireland, said: “With Irish marketers identifying digital as the key strategy to drive growth in 2015 our advertising industry has recognised that the gap between users’ ever increasing digital consumption and digital adspend must now be bridged. Now more than ever there is a genuine collaboration between the key stakeholders in the digital sector in the establishment of agreed standards such as Viewable Impressions. This collaboration is facilitated by IAB as the industry moves locally and globally to digital ad formats and practices that further enhance user engagement.”

Click on the image below to view the IAB PwC Digital Adspend for H1 2015 Infographic: 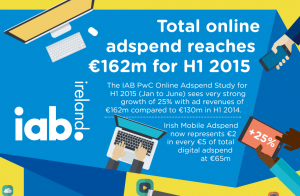 PwC (www.pwc.com/ie) provides industry-focused assurance, tax and advisory services. More than 161,000 people in 154 countries across the PwC  network share their thinking, experience and solutions to develop fresh perspectives an 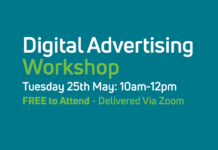