The 2015 IAB PwC Online Adspend Study records growth of 29% in the Irish digital advertising market with a total digital spend of €340m.

Paid-for-Search advertising has grown by 28% year on year and remains the dominant digital format with a 52% share of total online adspend at €176m.

Also within Display, Native advertising is tracking at 33% of total digital display with adspend of €45m. Native formats include in-feed advertiser controlled ads such as those appearing on Facebook and Twitter, publisher controlled in-feed advertising which is a feature of content rich sites such as news and entertainment sites as well as Discovery/Recommendation units embedded in sites by specialists such as Outbrain and Taboola. 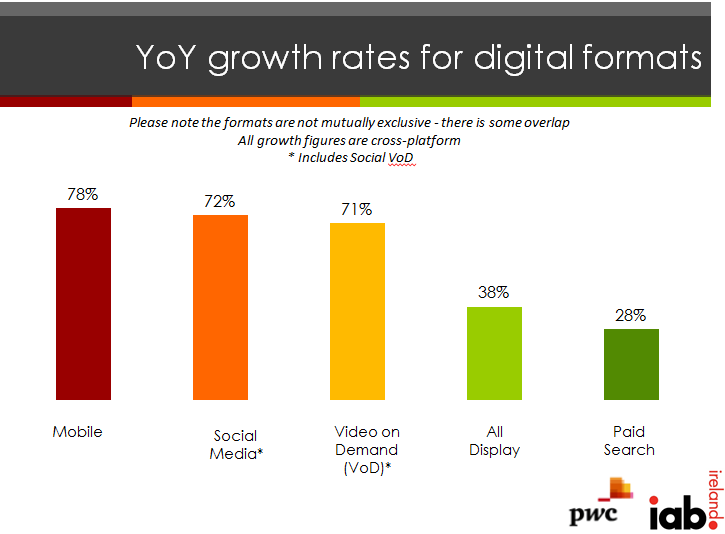 Finance and Retail are the top spending categories in digital display with a spend of 14%  respectively  followed by Telco at 11%, Auto at 10% and FMCG at 9%.

Mobile advertising is a key driver of total digital adspend growth accounting for 81% of the total growth arising from the increase in mobile advertising. Mobile Search accounts for 63% of mobile spend at €89m with Mobile Display advertising representing a 37% share at €52m

Continued growth of digital consumption, in particular on Mobile

75% of Irish people use a smartphone*.

75% of the Irish population use the Internet at least once a day – 1 in 5 admit to accessing the Internet every waking hour***.

2) Irish Marketers are committed to growing online budget in 2016

Media agency predictions: Carat predicts a 25% growth rate for digital in 2016 with Core Media forecasting a growth of 23%.

Commenting on the study results, Suzanne McElligott, CEO, IAB Ireland, said: “The big story from our 2015 report is the acceleration of mobile advertising to representing 41% of the total digital adspend. Mobile advertising is beginning to catch up with user engagement on mobile devices. IAB’s newly launched LEAN initiative, which promotes the use of ad formats that are Lighter, Encrypted, Ad-choice Compliant and Non-intrusive, will further enable advertisers to enhance their engagement with users across all digital devices”.

View the Infographic to accompany the report here.

PwC (www.pwc.com/ie) provides industry-focused assurance, tax and advisory services. More than 161,000 people in 154 countries across the PwC  network share their thinking, experience and solutions to develop fresh perspectives and practical advice for clients.