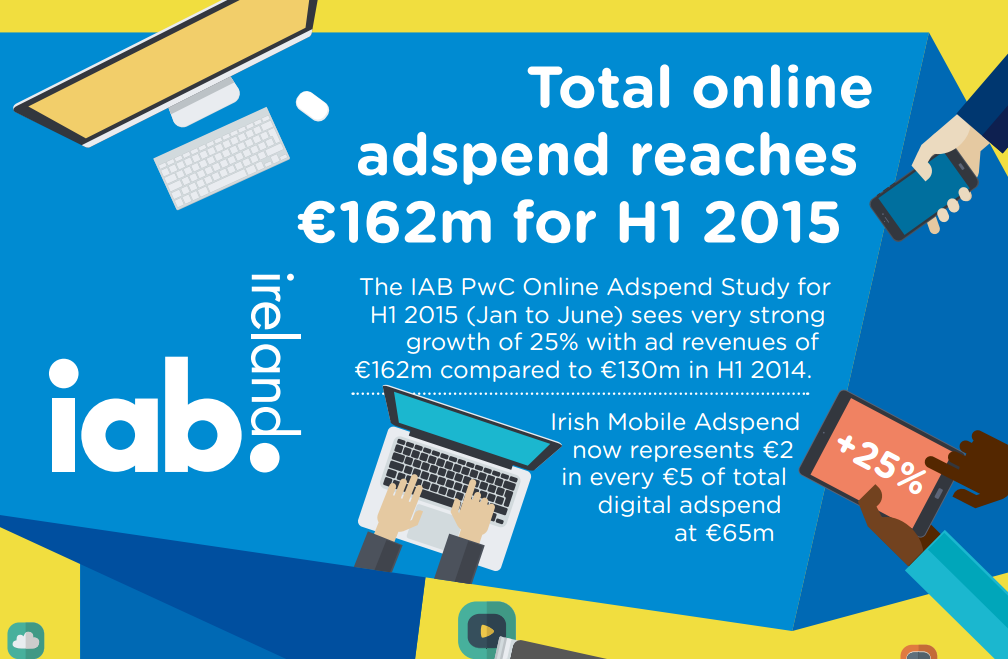 Overview of the Adspend study

The IAB has measured the size of the digital advertising market in the Ireland in conjunction with PricewaterhouseCoopers (PwC) since 1997.

Irish media owners submit digital advertising revenue figures confidentially to PwC who then analyse the submissions and produce aggregated data that shows the size of the Irish digital advertising market. Any gaps in the data are filled by the work of the Digital Adspend Advisory Board, which includes the major agency groups, and provides estimated figures for any major media owners that do not submit figures directly to the study.

Currently, in February 2016, we are in the process of gathering the data for the whole of 2015.

•   Various Irish leading publishers participate in the study, many of whom represent multiple websites. Other participants include sales houses and advertising networks.

•    Participating publishers are selected on the basis of traffic data and market knowledge. We estimate that our study accounts for 90% of online adspend. Reported figures are not adjusted to account for other organisations that have not participated.  Participation is on a voluntary basis.

•    Total advertising revenue is reported on a gross basis (i.e. including agency commission).

•    RTÉ do not submit data to the IAB PwC Adspend Study, RTÉ’s digital adspend as reported in RTÉ’s most recent annual report is included in the study.

Read the most recent Press Release for the Adspend Report for H1 2015. Or view the accompanying Infographic here.