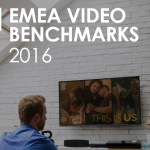 Brands and advertisers worldwide are investing an increasing amount of their media budgets into digital channels and leveraging video’s ability to influence audiences with compelling storytelling through sight, sound and motion.

Videology have just released the EMEA Video Benchmarks 2016 report, which features the trends and developments within leading EMEA markets.

The 2016 EMEA Benchmarks Report provides brands and agencies with key insights into the complex world of converging TV and digital video. Whilst broadcast TV continued to command the lion’s share of media spend in all European markets, digital video investments were at an all-time high.