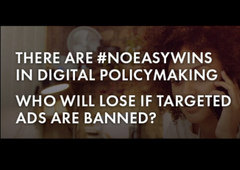 Brussels, 27 October 2021 — IAB Europe, representing the digital advertising and marketing ecosystem, today launched its #NoEasyWins campaign, highlighting how a ban on targeted advertising would be an ‘own goal’ for digital Europe with clearly foreseeable negative consequences for consumers, small businesses and small publishers alike.

As the negotiations on the Digital Services Act (DSA) package reach a climax in the European Parliament’s Internal Market and Consumer Protection committee (IMCO), the campaign corrects some of the untruths originating in some political circles in Brussels.  Building on a wealth of existing evidence about the value of targeted advertising, it reminds policymakers that there are no easy wins in the complex area of digital policymaking.

Proposals to ban or restrict targeted ads in Europe would have serious, far-reaching consequences. Data-driven advertising is crucial for the small businesses that depend on it to find customers, for the publishers who rely on it for revenues, and for the millions of users across Europe who want the freedom to choose which online content and services they pay for via subscription and which they access in exchange for a willingness to receive advertising.

The digital campaign features short videos asking viewers to consider who really loses out when access to highly effective, low cost tools is taken away from businesses. The videos are available on a dedicated landing page here and will be shared extensively online.

Commenting on the campaign, IAB Europe CEO Townsend Feehan said: ‘‘The aim of the DSA – to make the internet a place European consumers can navigate with confidence, including by reducing the incidence of online disinformation – is a crucial one that the online advertising industry supports on the merits and out of self-interest. We fully endorse provisions in the original DSA proposal such as mandatory information disclosures on the identity of the advertiser, including for issue-based and political advertising, that go beyond what is already laid down in EU privacy and data protection law.

But a move to ban “targeted” advertising would penalise SMEs and small publishers without necessarily having any material impact on online disinformation. As often in politics, there are no easy wins. We hope these short videos will encourage MEPs to resist the temptation to lay on more rules and instead insist that the existing rules be effectively enforced.”

The #NoEasyWins campaign highlights how targeting is essential to growing advertising revenue which has become even more important for Europe’s SMEs and other data-driven businesses due to the COVID-19 pandemic forcing them to shift their marketing exclusively online. Earlier this year, in an open letter these businesses – from the worlds of digital media publishers to content creators, entrepreneurs, and software developers – voiced their firm opposition to a ban on targeted ads, instead calling on the EU policymakers to focus on effective enforcement of the EU’s current data protection framework.

Attesting to the critical importance of ad revenues for smaller players, Benedikt Blomeyer, Director EU Policy at Allied for Startups, said: ‘‘For startups, targeted ads are a great equalizer, enabling them to challenge big incumbents on the basis of their product. Many startups run targeted ads, almost all startups use ads. An outright ban on targeted ads would ultimately make it harder for innovative products and services to reach businesses and consumers in Europe.’’

Confirming ad-related growth opportunities in the Central and Eastern Europe (CEE) and smaller markets, Marcin Nowacki, Vice-President of the Union of Entrepreneurs and Employers and the President of European Enterprise Alliance, acknowledged:  “Targeted advertising supports thousands of small and medium businesses in Central and Eastern Europe (CEE) allowing them to connect with new customers and helping them to grow. There are no easy wins in digital policymaking, but a ban on targeted advertising would be extremely short-sighted and would ultimately harm the CEE economy at a particularly fragile time.”

Finally, Tamara Daltroff, Director General of the European Association of Communications Agencies, shed some light on the broader, wide-ranging value of advertising:  “Targeted ads are a valuable tool used by businesses of all sizes, including start-ups and SMEs, NGOs and publishers across Europe. A ban on targeted ads would deprive them of reaching local and relevant customers, clients and supporters. Also, targeted ads play a critical role in funding a free and pluralistic internet and keeping the digital economy and information accessible to all.”

The #NoEasyWins campaign is a digital campaign centred on a number of videos which are available at the following site: www.noeasywins.eu.