The first in a two part blog piece on the changes in Display Advertising Measurement. As the industry moves from “served”to “viewable” impression measurement, let’s review the basics.

Back in the early days of Digital Advertising, on October 27 1994 to be exact, when Wired.com (known then as “Hot Wired”)  invented and displayed the first banner ad. On launch, Hot Wired featured Ads 468 pixels wide by 60 deep in size, from 14 different companies including including MCI, Volvo, Club Med, 1-800-Collect and Zima, but legend has it that the first HotWired banner ad was from AT&T, prophetically asking (see below) “Have you ever clicked your mouse right here? You will.”

Once these banners were presented online, those companies began to ask “Who has seen my ad?”, the same question advertisers have asked for two centuries in relation to all types of advertising. Display Advertising terminology was introduced, terms like “banner”, “tile”, “served”, “impression” and “click-through” started to be used and adopted through the Advertising Industry.  To brush up on the Jargon take a look at IAB Ireland’s Display Council’s Jargon Buster.

After the adoption of terms, came the need for effective measurement and guidelines. As Click-throughs became the norm, these developed to CTR (Click-through rate); the frequency of click-throughs as a percentage of impressions served. This became used as a measure of advertising effectiveness. 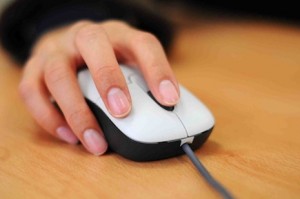 Fundamentally however the quandary still remained – just because an ad had been “served” online, did not mean that it had been “seen”. If we jump forward (way forward!) to 2014, catching up with the work of IAB Ireland’s Display Council, we can begin to track the progress towards the measurement of viewable rather than served impressions. A recent piece by Mark Gilleran of Yahoo, Chair of the Display Council published in our July Newsletter, Digital Direction – discussed the finer detail of this development, including to reach a global standard and agreement on KPIs and which digital measurements should be prioritised.  Considerations like what proportion of the ad is deemed “viewable” and what length of time the ad is presented for to be classed as “viewed”.

As IAB (US, UK and Europe) have started to clarify standardisation in this area. IAB US launched Making Measurement Make Sense (3MS),  a cross-industry initiative which is focused on five areas: defining impressions; establishing audience currency; creating a standard classification of ad units; defining ad performance metrics, and establishing brand attitudinal measures. JICWEBS  (The Joint Industry Committee for Web Standards in the UK and Ireland) have created “Viewability Product Principles“, a set of principles for testing whether a product is capable of counting “viewable impressions”.  Whilst IAB Europe released a statement on Brand Advertising Metrics including Viewable Impressions in April, to clarify their position. Web commentators have begun to take notice of this and some are even claiming that these efforts in measuring Viewability could “save the display advertising” industry.

IAB Ireland is committed to ensuring best in class consistency is applied in the Irish market, in relation to any global developments.  Working through the Display Council a survey is going to be issued in the coming weeks to better understand what the Irish market really needs and also to assess the knowledge levels among the industry in this area. In the next blog piece on this, I will focus on the survey and it’s efforts to agree what is really the “right” impression in relation to Display Advertising.