NEW YORK, NY (September 29, 2015) — The Interactive Advertising Bureau (IAB) and its Digital Video Center of Excellence today released “The IAB State of the Digital Video World,” a report that affirms the vital role that both mobile and programmatic play in digital video advertising around the world. The research taps into 19 markets across the globe – Brazil, Belarus, Canada, Colombia, Denmark, France, Ireland, Italy, Mexico, the Netherlands, New Zealand, Norway, Russia, Singapore, Uruguay, South Korea, Turkey, and the United Kingdom, as well as the United States – to reveal country-specific digital video revenues, wireless and broadband availabilities, and the perceived importance of formats, platforms, and monetization strategies.

Examining opportunities for the medium’s growth, an overwhelming majority of the participating countries agreed that mobile and programmatic video would gain importance in the overall media mix. Some common challenges also rose to the surface, including ad blocking, the fragmentation of video technology, and the variations of data and metrics across video platforms.

In addition, the report uncovers some key differences in the digital video marketplace from country-to-country:

“Digital video is captivating audiences around the world and it is imperative that we understand similarities and differences across borders if we’re going to build on the medium’s momentum,” said Anna Bager, Senior Vice President and General Manager, Mobile and Video, IAB. “An abundance of innovative programming is jumpstarting digital video into an international phenomenon. And, if marketers, agencies, and publishers want to take full advantage, they’ll need a wealth of international and regional insights at their fingertips in order to adjust their plans market-to-market for optimal impact.” 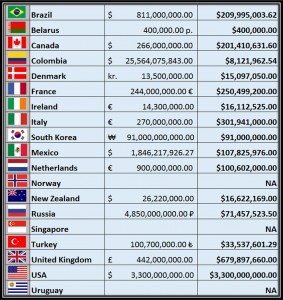 Submitted ad revenues have been converted to USD based on current exchange rates. At the time of the post, Norway, Singapore, and Uruguay do not have current video specific ad revenues for 2014.

“The IAB State of the Digital Video World” report was released at the 2015 IAB MIXX Conference in New York City, and is available for download at http://www.iab.com/stateofdigitalvideo.

The Interactive Advertising Bureau (IAB) empowers the media and marketing industries to thrive in the digital economy. It is comprised of more than 650 leading media and technology companies that are responsible for selling, delivering, and optimizing digital advertising or marketing campaigns. Together, they account for 86 percent of online advertising in the United States. Working with its member companies, the IAB develops technical standards and best practices and fields critical research on interactive advertising, while also educating brands, agencies, and the wider business community on the importance of digital marketing. The organization is committed to professional development and elevating the knowledge, skills, expertise, and diversity of the workforce across the industry. Through the work of its public policy office in Washington, D.C., the IAB advocates for its members and promotes the value of the interactive advertising industry to legislators and policymakers. Founded in 1996, the IAB is headquartered in New York City and has a West Coast office in San Francisco.