Looking around Dublin city centre last night it was clear that the World Cup was well underway, the sight of brightly adorned football fans on our streets is something we have now grown accustomed to, in two short weeks. I have even taken a mild interest in the proceedings, well at least I know who Ronaldo, Neymar, and Messi play for now, if you had asked me two weeks ago and made me guess, my response would have been embarrassing. I am however, wiser on the opportunity the World Cup presents to online advertisers and publishers having read the research report: 2014 World Cup: A Global Mobile perspective.

Prior to what many have claimed is the biggest sporting event in the world, IAB conducted research about the predicted Mobile use amongst football fans across the globe during the event. Key pieces from the report include that over a third (37%) of those surveyed globally already positively interact with Mobile Ads on a daily basis (29% Ireland) and 68% are willing to pay for World Cup Content (63% Ireland), which spotlights a strong opportunity to reach those soccer / football fans through mobile marketing. View the accompanying report infographic here and the full report is available to IAB members.

Looking around the web at this stage of the competition further evidence can be found of this massive sea change. According to the UK communications regulator Ofcom, the World Cup 2014 will be ‘the most mobile yet’ – comparing 2014 to the 2010 event in South Africa, more than double the proportion of adults in the UK will be able to follow the tournament via their smartphones (62 per cent compared to 30 per cent in 2010), read the full article here. Also the 2014 scheduling of the matches encourages mobile and tablet use; 5pm game scores can be followed via mobile on the commute home and the 11pm game scores can be viewed on a tablet in the bedroom. Since 1986, the final group games of the World Cup have been played simultaneously to avoid a repeat of the West Germany vs. Austria match-fixing of World Cup 1982. This simultaneous scheduling of matches supports the “multi-screening” behaviour of fans, where one game will be watched on TV and the other on a mobile.

Multi-screening is also know by the term second-screening by Google. Google themselves commenting in a recent article: “watching games is a much more active experience. “Second screening” has become so common that it’s striking to see that it barely existed a mere four years ago – creating more moments for marketers to reach fans online right when they’re most engaged.”

Many Irish football fans are religious about catching the half-time match analysis of the always opinionated but never boring Irish football pundits, Dunphy, Giles and Brady. Increasingly football fan culture has changed and fans want to comment and interact themselves, this is reflected in the volume of tweets (from June 8th prior to the event commencing) relating to key players in the competition: 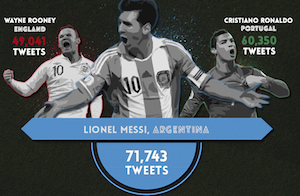 Moreover, this World Cup has been searched for more online between 2010 and 2014 than the Tour de France, the Olympics (Winter Olympics included) and the Super Bowl (yearly) combined, confirming the huge opportunity for brands.

I will do a round-up again at the end of the competition to check the actual results and the validation of the claims that this truly is the #WorldCup.